Whether General Pervez Musharraf’s régime was beneficial to Pakistan or was it tantamount to destruction of the democratic process, whether or not he was a good dictator; it is all a debatable matter. 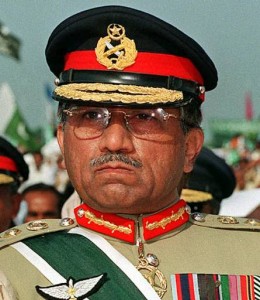 He, for the first time in Pakistani history, is going to trial for the heinous crime of High Treason.

Pakistani history is marred with the military’s interference in Politics, so much so that out of 12 holders of the office of the President, 4 were serving Generals of the Pakistan Army, who came to power as a result of a coup d’état, overthrowing a legitimately elected government. Even the inaugural holder of the office of the President of Pakistan was a retired army General.

Article 6 of the Constitution of the Islamic Republic of Pakistan states:

2. Punishment for high treason, etc.:
A person who is found guilty
(a) of having committed an act of abrogation or subversion of a constitution in force in Pakistan at any time since the twenty‑third day of March, 1956; or
(b) of high treason as defined in Article 6 of the Constitution,
shall be punishable with death or imprisonment for life.

Life imprisonment or death: High treason is a serious crime. It is perhaps the gravest of offences. Why then, one may wonder, Yahya Khan and Ayub Khan walk away without ever being reprimanded for their crimes against Pakistan? And what took it so long for the trial of Musharraf to commence after he had stepped down? 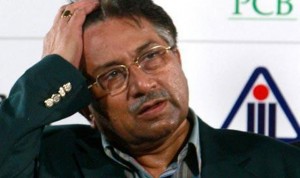 The answer is: The Pakistan Army is really really strong. These men took power when they were serving as the Army’s Chief of Staff, and used their position of power to command the Army to do their biddings. The Army protects its servicemen even after their retirement, and so Musharraf had a cover. Musharraf resigned in 2008 after the new parliament took office after the 2008 General Elections, and expressed its intentions to impeach him. The day he announced his intentions to leave office by stating that he had tendered his resignation to the Speaker of the National Assembly as under law, the man, in face of impeachment by the Parliament, was given a guard of honor by the Army before he left for the United Kingdom to seek refuge from the cases against him since his Presidential immunity lapsed upon resignation.

He spent about 5 years in self exile, and returned when his daughter was able to secure Protective Bail for him from the Sindh High Court; there were arrest warrants pending against him. He came during the time of elections when a caretaker Government was in office for the purpose of the conduct of the 2013 General Elections. When the Islamabad High Court had canceled his bail in a case, his security staff, comprising of military and paramilitary personnel, escorted him away from the court room even though the Police officials in the court room were ordered to arrest him.

When he finally surrendered, his farmhouse (a mansion) was converted to a sub-jail, probably to cut costs on providing him protection: he has angered many people by his constitutional and unconstitutional moves while holding the office of the President. This was the first time, a former army General was arrested, that too the former Chief of Staff.

The last of these cases occurred when Musharraf proclaimed a state of emergency and suspended the Constitution of Pakistan for a second time. It is pertinent to mention that he is the first of all military rulers in Pakistan to suspend the Constitution twice.

The Supreme Court, on a petition, asked the Attorney General for the Government’s response upon prosecution of Musharraf for High Treason. The Caretaker government responded that it was not its mandate to take a decision on the matter, and that the same should be decided by the upcoming government. The Senate in the meanwhile, and previously too, passed resolutions calling upon prosecution of Musharraf for High Treason.

The government of Nawaz Sharif, formed after the 2013 General Elections, within weeks of taking office through the Interior Minister Chaudhry Nisar Ali Khan expressed the government’s intentions to prosecute him. They wrote a vague letter to the Supreme Court stating the same, however it lacked instructions of commencing the trial.

It took five months, a sectarian violence in Muharram’s Ashura in Rawalpindi and a curfew in the Capital’s twin city, for Nisar Ali Khan the Interior Minister to announce at a hurriedly called press conference that the Government would be writing to the Supreme Court to form a Special Court under law for the High Treason trial. The announcement was described as a move by many to divert attention from the violence and curfew. True or not, the government through the Interior Secretary, wrote to the Chief Justice of Pakistan, with instructions to constitute a Special Court under the law for the purpose of the trial.

Meanwhile a Musharraf’s North America based spokesman lashed out at the government for the move, criticizing it as “undermining Pakistani Military”. He might have forgotten that Musharraf lead the Pakistani Military into an unauthorized warfare against India in the Kargil War from May – July 1999, humiliating Pakistan in front of the world.

Under law, the Special Court enjoys exclusive jurisdiction to hear the treason trial, and no other court, including the Supreme Court can interfere or intervene in its matters and proceedings.

We would then be in a position to get warrants or directions from the special court for summoning the people who have evidence but were not cooperating at the earlier stage of investigation.

The army might not save his skin this time. A current serving officer of the Pakistan Army, stating that what he was about to say would be his own views not the Army’s since he is bound by the law, to not to make official remarks, while explaining the army’s current stance, more specifically on the War on Terror personally told me:

The Military’s internal policy has changed. It is no longer what it was during the time of Zia-ul-Haq and Musharraf, yes I was in the army during those times. It is no longer like that, and I wouldn’t discuss that; currently the Army has just one mindset: we are subordinate to the Civilian Government. If we are ordered to fight, we will fight, if we are ordered to stop fighting, we will stop, no questions asked.

Is this trial too little too late, or just not relevant to the interests of Pakistan. Over the last few years, both Turkey and Bangladesh tried and sentenced to death their former military dictators and their abettors. Would Pakistan follow suit? Musharraf’s trial is not just about him, it is about the Rule of Law over any individual in Pakistan. If Musharraf is punished for his crimes against Pakistan, this would serve as a deterrent to future military ambitionists who aim to usurp powers like those before them. This should be done for Pakistan to evolve as a democratic state where the law is above all; it would officially mark a new chapter in Pakistani history, where the armed forces would be what they should have been: subordinate to the government of the people.

8 replies on “Trial of High Treason”

Excellent article which gives good insight of the case.

Thank you so much 🙂

Musharraf made more than the governments of PPP and PML-N did from the 90’s to date. The only reason that we know so much about the small corruptions of the civilian governments is that an opposition is there to speak out against the corruption in civilian governments, sadly, under the brute force of the military, everyone keeps their mouth shut…
Musharraf sold off many many state corporations and companies at throwaway rates: the PTCL is an example of this.
He even tried selling the steel mill, which lead to the onset of the lawyers’ movement leading to his ousting.
I remember reading an article in a British newspaper that the Musharraf/Aziz duo was the most corrupt ever Pakistan had seen.
Ever noticed how Musharraf made that mammoth sized farm-house mansion where he was recently imprisoned? He could never ever have made that out of his salary as the Chief of Army Staff and as the President… He has more foreign bank accounts than any politician ever. Its just that politicians are too touchy to talk about such accounts 😛

I repeat Ahmer, I am not defending Musharraf or his doings! It seems Greed is the root cause of the numerous problems our Homeland is facing! Every one who is ANyone in this country tries his best to fill his pockets(Even if they are bursting at the seams) at the cost of national interest! It may be Musharraf’s farm- house, Nawaz Sharif’s estate at Raiwind or the fort like mansion which is Zardari’s Bilawal house the sad stories are repeated again and again! What we need at the moment is corruption free good and transparent governance… if we don’t, God Forbid Pakistan’s integrity is at stake!

Absolutely true. But the problem here is: Democracy isn’t just casting our votes, it’s imperative that we hold our representatives accountable. Like it or not, we put them where they are, if they rob the national exchequer (treasury), it is like in a way we are party to their crimes, their abettors, their accomplices: because we enabled them to do so.
Even if our representative in the Parliament is in the opposition, we need to keep a check on him, as to whether or not he is doing what he was elected to do?
It is all a system of checks and balances; if we fail to keep an eye on our bananas, the monkeys will rob us (that’s a phrase I heard when I was a kid in the nursery).
Corruption free, transparent government can ONLY be established if we start asking them the questions we are supposed to be asking since 1947.

THE DEFINITION OF TREASON SHALL BE CONCLUDED IN A BROAD SPECTRUM. IT SHOULD NOT BE RESTRICTED UP-TO THE ABROGATION OF CONSTITUTION BUT FOLLOWING OFFENCES SHOULD ALSO BE INCORPORATED WITHIN THE ARTICLE 6 OF THE CONSTITUTION OF THE ISLAMIC REPUBLIC OF PAKISTAN 1973 (DULY AMENDED UP-TO DATE) AS WELL AS THE HIGH TREASON (PUNISHMENT) ACT 1973:-

HENCE DRASTIC AMENDMENT ARE REQUIRED TO BE MADE WITHIN ARTICLE 6 OF THE PRESENT CONSTITUTION READ WITH THE HIGH TREASON (PUNISHMENT) ACT 1973.