Shutdown to Rebuild, Wait, What?! 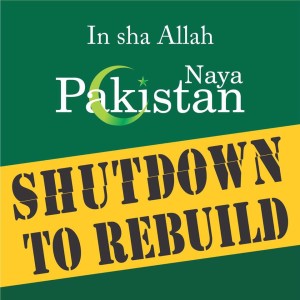 Shutdown to Rebuild, Wait, What?!? Seriously? What  were the PTI’s creative team thinking when they came up with this slogan?

On second thought, this might be perhaps the most clever way to present something that the party plans to do which happens to be so inherently outrageous and morally and legally unacceptable that the party leadership itself condemned the same in the past.

While I condemn murders of MQM workers, the loss to poor daily wage workers is back breakng.Karachi also loses approx. Rs 10 B /1day strike

Wait a second: the words ‘Shutdown’ and ‘Lockdown’ as display pictures next to a tweet condemning the same. Now that’s irony and hypocrisy.

That were PTI Leaders Arif Alvi and Khurrum SherZaman criticizing MQM’s strike on 1st May 2014. Few months later, the party is doing the same thing that they know and believe is wrong: PTI is planning to shut down major cities and eventually the whole country. Shutdown or Lockdown to Rebuild. Its an oxymoron.

And not just the PTI leadership, their supporters too:

They go an extra mile in abusing the MQM for something that their party is now doing.

Massive loss to economy. Yes. That’s what you get when you shutdown the financial capital of the country, or any city, as a matter of fact.

Yes we all agree that shutting down a city, blocking roads or paralyzing any city, is illegal.

But what can we say? The PTI is adamant to go ahead and shutdown Karachi, and Lahore, followed by the whole country. Just as they did in Faisalabad.

Arif Alvi stated that the loss suffered is over 10 billion for a day the city of Karachi is shutdown. Khurrum SherZaman too states that the loss is in billions. Not just this, we have seen the nuisance Islamabad. Yes, I’m talking about the assault on the Parliament and Prime Minister House. The attack and ransacking of PTV. Occasional attacks on Geo News office.

Pakistan suffered more than just this. This paid protest of PAT and PTI caused much more losses. The Chinese President canceled his visit to Pakistan, that put a question mark (or possibly a full stop) on the future of $32 Billion worth of investment.

The unrest and clashes in Faisalabad, and the enforced shutdown of the city following the death of a PTI worker: it is all condemnable in the strongest words.

But why is PTI doing this then? Because their beloved leader said so.

Lethal mixture of Jamaat e Islami and MQM, A party which listens to no sane voice…. Yeah you guessed it right. PTI it is.

PTI talks about Justice. Well, even the name of the party Pakistan Tehreek-e-Insaaf translates to Pakistan Movement for Justice. However the leader of the Party, cricketer turn philanthropist turn politician, is now a proclaimed offender in Anti-Terrorism Cases before an Anti-Terrorism Court in Lahore (well yes, terrorism in Pakistan is defined too broadly, therefore some of the acts he and his supporters have done fall under the category of terrorism),  and he has proudly challenged the incumbent government to try and arrest him.

Shutting down a city, just like they did in Faisalabad, if evaluated under the UK Anti-Terror legislation, is an act of terrorism. Yes, the same Anti-Terror laws for which the PTI grilled the MQM chief Altaf  Hussain, for this his statement about the Three-Swords monument in Clifton, Karachi.

Imran’s aid and ally, Sheikh Rasheed Ahmed has gone the extra-mile in calling out to the rioting workers of his party the Awami Muslim League and those of PTI to damage, burn and destroy public and private property to achieve the above stated goals. Incitement to an offence or speech that disrupts public order is criminally wrong. What Sheikh Rasheed has said does not sound just wrong, it is insane, treacherous.

Plan X: Imran Khan files a petition before the Supreme Court, asking for the Independence of India Act, 1947 to be declared unconstitutional. After the court accepts his petition, the Queen of England then appoints Imran Khan as her Viceroy.

Fortunately, or not so for Imran and PTI, English only has 26 alphabets and just like the article above, the number of plans end at Plan Z. However, people have suggested different approaches to this problem.

The PML-N and PTI are quite similar, ideologically. They are both working in the same way, for the same ideology. They even share the same vote bank. Just as Babar Sattar rephrases it in a question:

Isn’t the Shahbaz Sharif model of governance in Punjab very similar to what Imran Khan is promising in Naya Pakistan: a strongman at the top and everything falling in place under him intuitively?

Of the certain aspects of Imran Khan’s behavior and policies, as Babar Sattar  states in the same article, that would give even his well-wishers the jitters, that most bothersome is the inability of the PTI leader to distinguish between the State and the government and the fact that Imran is willing to hold a gun to the country’s head to negotiate with the PML-N.

2: His vigilantism. Khan’s argument is that since he didn’t get justice on his terms, he’ll now have to shut the country down. Can any rule of law proponent justify such course of action? There is a pattern here. In 2013, PTI had asked its vigilantes to forcibly block NATO containers in KP. That circus was eventually dispersed by court orders.

3: Khan’s inability to distinguish between the state and government. Whether it was Khan inciting everyone to refuse paying taxes and utility bills and sending money through legal banking channels, or his Plan C of shutting Pakistan down, he seems to have no qualms holding a gun to the country’s head to negotiate with PML-N.

4: Khan’s polarizing politics. In a democracy people need to be brought together to forge consensus and get things done, not torn apart. Khan’s message of hope is wrapped in bitterness and hate, which has polarized this country. Today Pakistan is a divided house; even its rational segments at war with one another over political differences. Forget Khan’s ire for opponents and critics, is there room for dissent even within PTI?

We really need introspection and self-accountability all around: the PML-N has to reflect upon whatever has happened the last few months and how they should have handled it; the PTI needs to realize that ends don’t justify means. Both parties need to work together, get to the negotiation tables and resolve their conflicts in a sensible manner, for the sake of the nation.