I have been away from blogging for quite some time. A long time really.

Here’s why. My draft section is piling up. I usually begin writing, then leave it incomplete, saved as a draft, and, since I blog about current/political issues, it becomes irrelevant over time.

I haven’t neglected this blog entirely. I’ve been updating the themes and plugins, and most importantly WordPress itself. WordPress is a great software. I even turned on HTTPS (the secure/encrypted variant of the Hypertext Transfer Protocol).

I am in the final year of my LLB. Four exams and an essay (which I’d post here, just like my presentation) to go. I’d be free by the end of May.

I plan on being more serious and dedicated to blogging as soon as I’m done with my exams. To that end, I’ve created an Urdu version of my site, and blog, and plan to blog bilingually.

I’ve had leaning a bit of Spanish and Esperanto some months back, via Duolingo. Spanish is the second most spoken language after Mandarin (that’s the name for Chinese). Mandarin is a bigger challenge, perhaps for a later stage in life. Esperanto is a constructed language; it did not evolve like other human languages, but was constructed – created, over a hundred years ago. It has accumulated a wealth of literature which I’d love to explore. Maybe I’d do a blog post on languages.

While I’m a native speaker of Urdu, my reading and writing skills lag behind. I hope my blogging in Urdu polishes them and brings them at par with English. After all, the more languages you know, the better you may express yourself!

I have a lot to write about; will be back by the end of May, a lawyer by then. 🙂 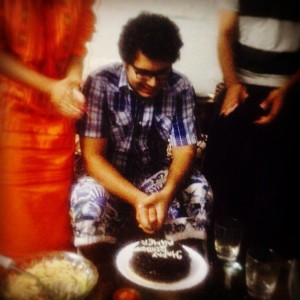 Another year gone by; a remarkable, happening year! So much happened in this one year, so many new experiences, so many lessons learned. I won’t write much because, well, its my Birthday!

So, before anyone else, I’d wish myself:

Happy Birthday to Me! 🙂